It's time for another gratitude giveaway! I'm very thankful to Lindsay Cummings, Victoria Scott, and Kristi Helvig for providing blurbs for VICARIOUS. Scoring blurbs for a book's jacket is something that is highly stressful to most authors, and extremely so for me, because I have been rejected a lot--way more than I ever got rejected by agents. (Stuff like this is part of what I mean when I tell people the rejection part of writing increases dramatically after you land an agent.)

All three of these fabulous authors have written books that I think are good comparison titles for Vicarious, and I am grateful they found the time to fit reading my ARC into their busy schedules. If you have enjoyed their novels, chances are you'll enjoy the action-packed sci-fi storyline and tough but vulnerable heroine of my latest novel too :) 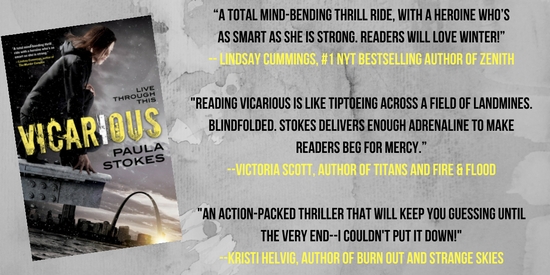 Lindsay also hosted the book's trailer reveal! Vicarious features Korean sisters as main characters. ICYMI: You can read more about why I made Winter and Rose Korean in my blog tour posts.


For this contest, I'm giving one lucky reader their choice of one currently available book by Lindsay, Victoria, or Kristi. This giveaway is INT and I will be ordering from The Book Depository or Wordery. Here's some information on each author's latest book or series.

An action-packed, blood-soaked, futuristic debut thriller set in a world where the murder rate is higher than the birthrate. For fans of Moira Young’s Dust Lands series, La Femme Nikita, and the movie Hanna.

Meadow Woodson, a fifteen-year-old girl who has been trained by her father to fight, to kill, and to survive in any situation, lives with her family on a houseboat in Florida. The state is controlled by The Murder Complex, an organization that tracks the population with precision.

The plot starts to thicken when Meadow meets Zephyr James, who is—although he doesn’t know it—one of the MC’s programmed assassins. Is their meeting a coincidence? Destiny? Or part of a terrifying strategy? And will Zephyr keep Meadow from discovering the haunting truth about her family?


Do you already own a copy of The Murder Complex? Check out Lindsay's other books here.

Ever since the Titans first appeared in her Detroit

neighborhood, Astrid Sullivan’s world has revolved around the mechanical horses. She and her best friend have spent countless hours watching them and their jockeys practice on the track. It’s not just the thrill of the race. It’s the engineering of the horses and the way they’re programmed to seem so lifelike. The Titans are everything that fascinates Astrid, and nothing she’ll ever touch.


She hates them a little, too. Her dad lost everything betting on the Titans. And the races are a reminder of the gap between the rich jockeys who can afford the expensive machines to ride, and the working class friends and neighbors of Astrid’s who wager on them.

But when Astrid’s offered a chance to enter an early model Titan in this year’s derby, well, she decides to risk it all. Because for a girl from the wrong side of the tracks, it’s more than a chance at fame or money. Betting on herself is the only way she can see to hang on to everyone in the world she cares about.

Most people want to save the world; seventeen-year-old Tora Reynolds just wants to get the hell off of it. One of the last survivors in Earth's final years, Tora yearns to escape the wasteland her planet has become after the sun turns "red giant," but discovers her fellow survivors are even deadlier than the hostile environment.

Holed up in an underground shelter, Tora is alone--her brilliant scientist father murdered, her mother and sister burned to death. She dreams of living on a planet with oceans, plants, and animals. Unfortunately, the oceans dried out ages ago, the only plants are giant cacti with deadly spines, and her pet, Trigger, is a gun--one of the bio-energetic weapons her father created for the government before his conscience kicked in.

When family friend, Markus, arrives with mercenaries to take the weapons by force, Tora's fury turns to fear when government ships descend in an attempt to kill them all. She forges an unlikely alliance with Markus and his rag-tag group of raiders, including a smart but quiet soldier named James. Tora must quickly figure out who she can trust, as she must choose between saving herself by giving up the guns or honoring her father's request to save humanity from the most lethal weapons in existence.

Have you already read Burn Out? Here's more information about Kristi's other books!

Enter in the Rafflecopter below. Don't forget to comment on the post and tell me one bookish thing or person you are grateful for :)

a Rafflecopter giveaway
Posted by Paula Stokes at 3:58 PM 13 comments: