I am interrupting my Finding Happiness as a Writer series to bring you these feelings about comparison titles. Why? Because I want to, and it seems like many of you have strong feelings.

Disclaimer: These are my thoughts. They are in no way the thoughts of my publishers and I have no behind-the-scenes knowledge of book marketing or promotion. TBH, I don't even know the difference between the marketing and promotion and publicity and sales departments and who does what. I might use those terms incorrectly in this post--please feel free to correct me if you know more about any of this. It's all the Department of Mysteries as far as I'm concerned.

I'm writing this partially because I answered a question on GR that was like: "Is Liars, Inc. like Pretty Little Liars because I hate that book and one of the reviews said it was and now, I don't know if I want to read it..." [paraphrased]. In hindsight I realize this probably wasn't a question for me and by answering it I might've come across like a crazy-eyed authorzilla and scared the question-asker even farther away from my book. But I'm the only one who has read the shiny finished copy of Liars, Inc. and sometimes no one answers those questions and *nibbles on nails* *mumbles to self* Anyway, sorry if anyone thinks my response was out of line. I'll try to exercise more self-restraint in the future ;-) 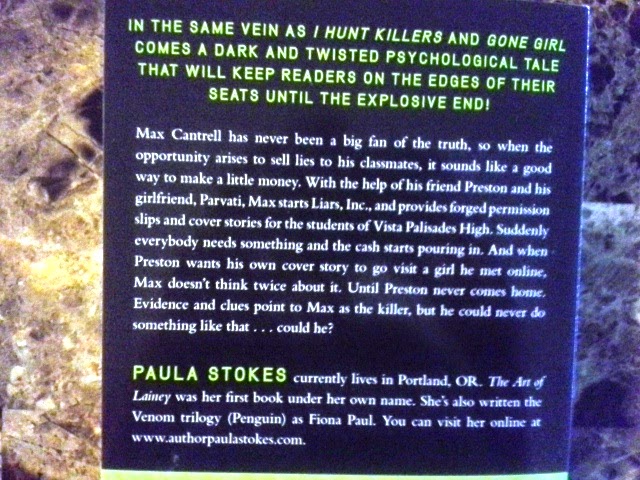 Here's my flap copy, what many people (including myself every once in a while) incorrectly refer to as a blurb. 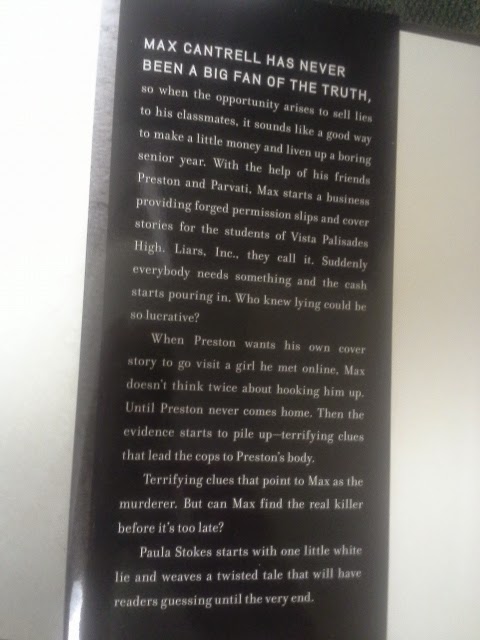 
My understanding [again, correct me if I'm wrong] is the catalog copy, which is also what is on Edelweiss/NG/the ARC/in the physical and digital publisher catalog, is geared toward sales reps, corporate buyers, booksellers, and librarians--not bloggers. Reps, buyers, booksellers, and librarians see hundreds of titles every month. They often have to make decisions about buying and promoting books without reading them, so comp titles are invaluable. Bloggers are an important part of the industry, but my understanding is bloggers don't often recommend books they haven't already read.

It makes sense that the catalog copy is shorter, because the people mentioned above have to make decisions about hundreds of books in addition to a lot of other job responsibilities, so publishers try to appeal to them quickly. Also, catalog copy has to fit in a physical catalog where space is limited. Comparison titles are a good way to get across a lot of information in a few words.

But why do publishers insist on using the same famous books and authors over and over?
The whole idea of a comparison title is: [New book] is for fans of [something most people have read/seen.] Something different like [New book] is for fans of [underperforming midlist title] and [obscure 1990s TV show] helps no one. Neither Harper nor I are trying to say I am every bit as good as Gillian Flynn or that my book deserves a movie, etc. [Although I think a movie would rock :D] But if Harper said "In the same vein as [well-written mystery book that only sold 400 hardcovers nationwide], bookstore buyers might look up those sales numbers and be like "Yeah...we'll take a pass on this one."

So when you see "For fans of The Hunger Games...", please do not assume the author or publisher are delusional narcissists who are shopping for yachts. This is simply a business decision, much like a cover. You can't expect publishers to be like "For fans of The Hunger Games...who don't mind a more confusing plot and not quite as well-developed characters." If they don't sell books, they don't make a profit. When in doubt, remember that publishing is a business, and if you like having lots of books to choose from, publishers need to be able to sell them and make money.


Comp titles to appeal to readers/bloggers:
Another thing to know: When you go into a big bookstore and see a display table of "For fans of John Green and Rainbow Rowell" or similar, that placement is called "co-op" and is often paid for by publishers. Endcaps and table displays move copies, and bookstores are smart enough to know this limited space has financial value. Not always, mind you. If I were a bookseller I'd try to hook up the books I really liked. But again, publishing is a business, and before you clutch your chest at the unfairness of it all, realize that if things were done differently you might have fewer books to choose from.

But maybe you're thinking comp titles totally don't work. Let's do an informal test using my personal comps for my future titles/WIPs:


Chances are, one of those descriptions made you go "Ooh." But if not, just because comp titles don't work for YOU doesn't mean they don't work. There are a million "pre-reviews" on GR likes this one:

More thoughts from my muddled brain:

1. Rule Number One of book promotion is to have a solid product. If readers find merit in your story, if they feel your prose was crafted with care, then even if the comparison doesn't work for them, they can still enjoy your book. If your book is a "a rough draft hurriedly revised to capitalize on a hot trend" book that marketing has blinged out with a foil cover and is pimping as for fans of The Hunger Games, Divergent, John Green, 50 Shades, The Bible, The Anarchist's Cookbook and carne asada fries [did I miss anyone?], readers will see through that.

2. Creating expectations with bestselling comp titles can be dangerous, but not as dangerous as promoting your book in a way where it doesn't get read. Bad reviews don't scare me (too much), but the idea of no reviews is terrifying.

3. But even bestselling comps should be chosen with care. If every contemp is compared to John Green and Rainbow Rowell and Sarah Dessen, and every dystopian to Divergent and The Hunger Games, it becomes totally meaningless.

4. But if Rule Number One is followed, I don't believe any marketing comparison is setting a book up to fail. First of all, those comps aren't usually printed on the finished book so they don't affect in-store sales. Second, the idea is to entice readers to read. And like I said, if the book is solid then even if the comparison is a reach, the reader should still enjoy the book.

5. If you're someone who sharpens up your snark and reads a book with the sheer intent to expose how fraudulent the marketing plan is...um, okay, that's your right. But try to remember books are written by actual people, not marketing departments. And then maybe go look at some kitty pictures or something.


6. Then again, I do believe authors have a responsibility to advocate for their books and question uncomfortable comparison titles or flap copy/cover art that is misleading. I have a friend who asked her publisher to remove a reference to The Hunger Games because she felt it wasn't a legit comparison. They complied.

7. "But if your book is good then you shouldn't need to compare it to bigger books." I see this proposed a lot and it's kind of circular logic since no one will know how good your book is if they don't read it. Hundreds of books get published every month. Really awesome books sometimes fail just because not enough people find out about them. It would be great if every book got trailers and print ads and book tours and heavy promotion, but less than 5% of books get those things. And if you think publishers should give every book those things, then what you're saying is you want a lot fewer books to be published. Marketing money doesn't grow on trees.

8. Bloggers are an invaluable but small segment of the reading public. In addition to marketing for booksellers and librarians, marketing departments create promotions for the "average reader." The average reader does not read 250 books a year and they don't write hundreds of critical reviews. They don't care as much about instalove or love triangles because they are not forced to deal with them multiple times a week. They are not as jaded when they see "For fans of Divergent and The Hunger Games" used in marketing materials.

9. "Well does a book NEED to be compared to other books?" a friend asked me earlier on Twitter. I say probably yes, for the aforementioned reasons that have to do with sales reps and librarians and booksellers. Also I asked a sales rep and she said yes too.

On a related note, I think a lot of readers have no idea just how few copies some books sell. This article cites that The Cuckoo's Calling had sold fewer than 500 copies in six months before JK Rowling was outed as the author. Here's Abby McDonald's blog about How Dangerous Girls sold less than 450 hardcovers in its first year. Those kind of sales figures generally don't make your publisher money. You write enough books that don't make your publisher money and you end up out of a job. Marketing books, selling books--these things are tough. If something like a comparison title can help a book/author find an audience, and success, isn't that a good thing?

What are your feelings on comparison titles? Discuss, but try not  to bash individual titles or authors. I'm not going to censor people, but please remember those are my friends and colleagues you're talking about.

Email ThisBlogThis!Share to TwitterShare to FacebookShare to Pinterest
Labels: comparison titles, I should be working but, just my opinion, kittehs, marketing, ponderings