Finding Happiness as a Writer: TAKE A BREAK

Let's say there's an asteroid rocketing toward Earth at this very moment and it's now or never. Go do that thing you've been wanting to do, whether it's telling that guy you like him [good luck], ordering the pickled duck brains [I hope that's not a real thing] or going kite-boarding in the Columbia Gorge [see you there, maybe!]

I'm sort of happiness-challenged at the moment, so I'm taking a break too. I think I'm just completely drained of fuel. Pre-release is tiring! So I'm going to do something fun and blog about my favorite TV shows for writers. Hey, that's another way you could take a break and even kind of consider it working! #WinWin :) So yeah, if you're not up for risk-taking, kick back and relax with some quality television...

First, no need to reinvent the wheel, so here's Shae's post on why you clearly need to be watching The 100. I looooove The 100, and Shae hits on every reason why it's totally worth checking out.


And here's Christina's post on the best TV shows for YA/NA readers. Many of these are Korean. All I have to say to that is 예, which is "yes," but is pronounced sort of like "neeeh", so it sounds like "no." Korean is tough. I think I only learned about 200 words in an entire year of living there, most of which had to do with food. But check out Christina's post and broaden your horizons already :-)


And then here are some additional shows I recommend for you, especially if you're a writer:


WATCH IT FOR THE HIGH CONCEPT PLOT:

Pretty Little Liars:
We all know the story right? Four girls from different cliques are bonded by their friendship to Queen Bee Allison, who alternates between being kind and less-than-kind to keep them caught in her web. When Allison is murdered, a mysterious A starts sending all of the girls texts, blackmailing them and threatening to expose all of their dark secrets. The girls band together to fight back, but A is all-knowing and seemingly everywhere. It's a little campy and over-the-top, but Aria, Spencer, Hanna, and Emily all feel both flawed and endearing--and the show is compulsively watchable because you just have to know who A is. I've only seen a couple of seasons, but apparently it's still as addictive as ever. Bonus factors: Aria's wardrobe, Caleb.

Orphan Black:
Orphan Black will hook you from the first five minutes of Episode 1 and never let you go. Teeming with action--car chases, fight scenes, gun battles, etc.--the plot will keep even the biggest adrenaline junkie wired, and every episode manages to end with a cliffhanger that makes you desperate to tune in again. But the real beauty of Orphan Black lies in the amazing character relationships between the main character and her brother and "sisters." And holy hell, you won't believe how many different characters Tatiana Maslany can pull off convincingly. I suspect she might not be completely human ;-) Bonus factors: heady philosophical questions, sisterly love, Paul

How to Get Away With Murder:
Viola Davis knocks it out of the park and a few blocks down with her portrayal of cunning attorney and law professor Annalise Keating. In addition to a weekly procedural angle where Annalise and five of her law students work on interesting cases most lawyers would consider hopeless, there's also an overarching storyline that involves a pair of murders. Someone is a killer and every single character here seems guilty of something. The legal aspects might be fudged a little but the mystery is incredibly addictive and at the completion of Season One I can see this was tightly plotted from the get-go. Super-impressive. Bonus factors: tons of diversity incorporated in a non-agenda-ish way, parallels to LIARS, INC ;)

WATCH IT FOR THE AMAZING DIALOGUE:

Veronica Mars:
You guys probably know that the creator of Veronica Mars and cool dude who brought us the movie is Rob Thomas--no not the lead singer of Matchbox Twenty--the YA author who wrote Rats Saw God, among other awesome books. So it only makes sense that the dialogue is this series that features plucky but untrusting and emotionally scarred Veronica would be stellar. Thomas's characters don't just sound like real teens. They sound like real teens you wish you could be saying things you wish you had said. Bonus factors: LoVe, more LoVe.

Friday Night Lights:
Don't mess with Texas, and definitely don't mess with Texas football. Back when I used to go to a lot of conferences, multiple editors recommended this series as a must-watch for writers trying to craft authentic high school dialogue. Sixty-three Emmy nominations and an 8.7 rating on IMDB can't be wrong. Check this one out even if you're not into sports. Bonus factors: realistic portrayal of sports, well-rendered and believable characters.


WATCH IT FOR THE AMAZING CHARACTERS:

Dead Like Me:
What's worse than being an eighteen-year-old girl whose life is suddenly and unexpectedly snuffed out by a flaming toilet seat that falls from the space station? Getting the nickname Toilet Seat Girl in the afterlife. Georgia Lass wasn't doing much with her life when it ended, and now she's a grim reaper who doesn't even get paid for putting in long hours guiding souls. This urban fantasy show has fun world-building, but what really makes it shine are the reapers and the way they interact with each other and the dead--especially in Season One. Bonus factors: Mandy Patinkin, hella catchy theme song

Homeland:
Homeland wasn't even on my radar until someone told me Claire Danes played a bipolar CIA agent. My CIA-wannabe book-gf in LIARS, INC. has a personality disorder with some overlap in symptoms, and since I've always wanted to write a spy-themed companion novel, I decided to check out this show just to see how the psychiatric issues are handled. OMG, you guys. The characters here (mostly Carrie and Brody) are amazing. They are so flawed and lifelike and utterly compelling. Sure there's cool espionage stuff and high-action scenes too, but Danes and Damian Lewis make this show. Bonus factors: more Mandy Patinkin, fair and balanced portrayal of both sides

PUTTING IT ALL TOGETHER: 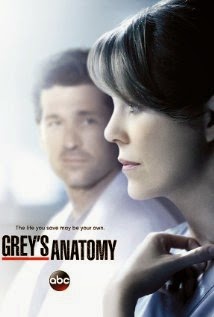 This is only show on the list with less than an 8.0 rating on IMDB, and a 7.7 going into its eighth season is pretty dang good. I feel like Grey's gets a bad rap as a "chick show" or soap opera or something, but here's why it's fab:

The writing: Voice-overs usually make me crazy, but each episode's intro and fade out narrative generally contain some of the most moving prose.
The characters: They're mostly doctors so they're all smart, but they also manage to all feel different without being "types." And they grow. I've watched them develop and change from Season One.
The dialogue: It might have lost a little something with the exit of the wonderful Sandra Oh, but the interactions here feel genuine and thought-provoking.
The plot: Shonda Rhimes and crew combine the most high-profile and interesting surgical cases with personal issues ranging from PTSD to abortion to infidelity to terminal illness, usually without making any of it feel outlandish or melodramatic. 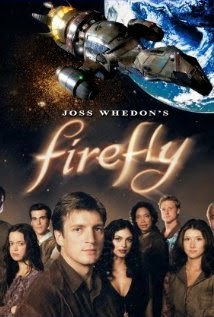 Firefly:
So Firefly was pitched to me by a guy who didn't know better as a "space western." Ugh--that sounds like the worst show in the world. I don't like space and I HATE westerns. So I probably never would have watched this if said guy hadn't basically forced me to when I was stuck at O'Hare waiting for a delayed flight. Thanks for dropping the ball, United--Firefly is brilliant!

The writing: Joss Whedon is a genius. Enough said.
The characters: Just your garden variety of space outlaws--a smuggler, an intergalactic courtesan, a doctor, a pastor, whatever the hell Jayne is.
The dialogue: "Can we get to the sexin' up part already?" Quit making me laugh, Jayne!
The plot: I don't even remember if there was an overarching plot beyond "Don't get caught" (the whole River thing I guess?) but the mini-plots and subplots were all so fantastic that it was more than enough. 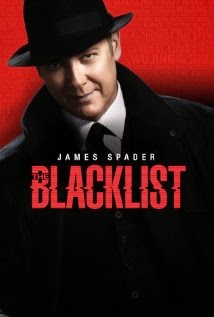 I was intrigued by The Blacklist promos before the show even started, but I never bothered watching it because it looked like just another FBI crime show. Dude, this show is so much more than the usual law enforcement procedural. Special Agent Elizabeth Keene starts her job as FBI profiler and is immediately tasked to a black ops division after a criminal informant named Red Reddington asks to work with her. Red is shady and duplicitous, but he's also protective and kind...and keeping secrets.

The writing: If you can make a fluffy, nice girl like me fall in love with root for a balding hit man and go "awww" at the tender gesture of sending someone a severed head in a box, you're doing it right.
The characters: Red Reddington is horrible, but he's also complex, layered, kind, redeemable. The verbal and emotional dance he and Keene do--strictly platonic--from week to week is the main reason I keep coming back.
The dialogue: Goes from being witty to hilarious to incredibly poignant. The Blacklist makes me gasp and laugh and weep in the span of minutes.
The plot: Like Gray's Anatomy, this show keeps interest levels high by featuring the most interesting and unusual types of criminals in a weekly procedural format, and also incorporating an overarching storyline involving Liz, Liz's husband, Red, and some of Red's criminal acquaintances. Yeah, it can be a little over-the-top, but a realistic FBI show would probably be as dull as a realistic surgical one.


So those are a few of my picks, but I don't watch much TV and I don't have cable, so I realize they're all pretty mainstream. I know there's scads of good stuff out there I've never heard of. Your turn--share your favorite shows in the comments and tell what you like about them.

Email ThisBlogThis!Share to TwitterShare to FacebookShare to Pinterest
Labels: finding happiness as a writer, take a break, TV shows