GIRL AGAINST THE UNIVERSE: Read the original beginning

A lot of you know that I made massive revisions to GIRL AGAINST THE UNIVERSE during the editing phase, including researching and writing the entire therapy arc and psychologist sessions, which are based on actual cognitive behavioral therapy. The submission draft of the book was lighter in tone. Maguire wasn't struggling quite as much at the beginning of the story, and although her journey to attempt to overcome her fear of being a bad luck charm went through largely the same task-oriented trajectory, it wasn't until the end of the book that she realized she needed the help of a professional therapist. You can read more about the specific revision strategies I incorporated over at Forever 17 Books.


I thought it would be fun to share the original beginning to the story. If you were one of my #LoyalLiars street team members then you might have already read this. Either way, if you've read the novel you'll recognize about 40% of these paragraphs from the final book. This is pretty common for me--to cut entire chapters but excerpt out certain passages that I think are particularly meaningful and fit them in elsewhere. Check it out:


I slide my chair back from the table and mutter something about finishing getting ready. “Dead” is not a word I want associated with today.


If you want to read more deleted scenes, you can check out Maguire and Jordy practicing tennis at the local tennis club, or Maguire and Jordy's sister trying to hide Maguire from Jordy's mom. I have over 100 pages of cut scenes from GIRL AGAINST THE UNIVERSE and I will be sharing more of them in the future, both on this blog and over at my Wattpad account.

BONUS: Are you a fan of dark, action-packed stories? Click here to read the beginning of my twisty mystery VICARIOUS, releasing August 16, 2016 from Tor Teen. 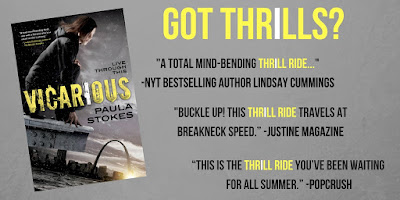