It's time for another #SizzlingSummerMysteries giveaway! This week I'm proud to feature one of my very first published author pals, Antony John, and his Hollywood mystery, Imposter. Antony is kind of a mysterious guy so you won't find him hanging out online much. (Rumor has it he's actually the ninth doctor, but I don't watch Doctor Who so I don't know if that's something that could be keeping him busy ;D)

So there have been a scad of YA books set on Hollywood sets lately, but all the ones I can think of have been romantic contemporaries. This is a great Veronica Mars type mystery featuring a guy's guy (you know how I like those) as the main character. I was lucky enough to read early and later drafts of Imposter, and I'm pleased to say it is a clever mystery that will keep you guessing, with romantic and family subplots that add to the story without overshadowing the narrative. And the prose here is absolutely stunning. I think I must have marked a passage on almost every page that I wanted to scrawl down in a notebook because it was so carefully crafted and insightful. 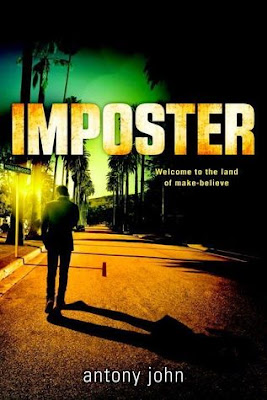 Perfect for fans of Veronica Mars, this Hollywood thriller explores the blurred lines between Hollywood glamour and reality.

Seth Crane has hit rock bottom. His mom recently died, his dad had a stroke and is out of work, and he just lost out on a commercial role. So when a producer shows up at his community theater production and offers him the lead role in an Indie film with major Hollywood buzz, it seems like the answer to all Seth’s problems.

Seth gets swept up in the Hollywood glamour right away, staying in a fancy hotel, going to the best parties, doing press conferences, and falling for the beautiful starlet Sabrina Layton and then his costar Annaleigh. But things suddenly start popping up in the tabloids—things Sabrina and Annaleigh told him in confidence and that no one else could know—and the line between the film and reality starts to blur. Nothing in Hollywood is what it seems, and Seth has to decide just how far he’s willing to go for fame, money, and to protect the people he loves.

Antony John was born in England and raised on a balanced diet of fish and chips, obscure British comedies, and ABBA's Greatest Hits. In a fit of teenage rebellion, he decided to pursue a career in classical music, culminating in a BA from Oxford University and a PhD from Duke University. Along the way, he worked as an ice cream seller on a freezing English beach, a tour guide in the Netherlands, a chauffeur in Switzerland, a barista in Seattle, and a university professor. Writing by night, he spends his days as a stay-at-home dad—the only job that allows him to wear his favorite pair of sweatpants all the time. He lives in St. Louis with his family.

Here's Antony sharing some insights about his seventh novel:

For a young actor in Hollywood, reality and fiction blur.


2. What is/are your favorite thing/s about the story?

I’m a total sucker for twisty thrillers (which is why I loved LIARS, INC.), and IMPOSTER has twists galore. I also love taking tropes — and when it comes to books and movies about Hollywood, there are so many to choose from — and subverting them. Basically, I like keeping readers perpetually unsure and unsettled, because I’m a terrible, evil person :) [Paula: It's true, he is. And the worst part is that he's evil in a British accent, so he kind of tricks you into thinking he's this charming fella!]

Halfway through the editing process, I switched to a new editor who had a different vision for the book. This required a lot of rewriting. On the bright side, this turned out to be the greatest part of the writing experience too, as her ideas were awesome. Now it’s impossible for me to imagine the book any other way.


4. If this book became a movie, what song would play during the credits?

Hmm, tricky one. If we were trying to play up the twisty thriller / noir vibe of the book, we could go classic with “Windmills of Your Mind” (preferably the moody Dusty Springfield version). Alternatively, we could focus on the blurring of fiction and reality in Hollywood, in which case I’d vote for “City of Delusion” by Muse.

5. Is this book your attempt to vicariously experience life as a Hollywood actor?

Uh, yeah. I came really close to stardom in my elementary school’s nativity play, but it’s tough to make that transition from child actor to Hollywood icon. Now that I’ve written all about it, I’m kind of glad I didn’t get to experience it in real life. Writing books seems much less stressful . . . and safer too!


I totally played a goose in my middle school's presentation of Charlotte's Web, so I'm right there with him. I almost got to be Charlotte but the girl who beat me out actually looked like a spider. But wait. There's something more stressful than writing books? *brain explodes*

Allons-y! Get click-a-lickin on the Rafflecopter so you can win this book. Antony has a signed ARC to give away if the winner has a US address, and because I don't want my foreign friends to miss out, we'll hook the winner up Book Depository style if you're outside the US. Apologies to those of you who live outside of the TBD shipping area. If we had lots of $$ we'd hook you up, I swear. <3

Because Antony was kind enough to mention LIARS, INC., I'll leave this here for one more week :D  --> ICYMI: Check out an interview with Parvati from Liars, Inc. and enter to win a copy of my latest mystery over on In Love With Handmade. See you next week for another giveaway! :D
Posted by Paula Stokes at 12:45 AM