Last month I did a post about the VICARIOUS cover. Now I'm going to talk about how much I love the cover for GIRL AGAINST THE UNIVERSE. Bonus, I'm also going to link to a contest for the first signed ARC and tell you how you can enter to win the second signed ARC. These are the only ARCs I'll be signing and giving away this year, so if you want to read a printed version of the story early, this is the post for you.

Most book covers are either photography-based or art-based, and both methods can be created in a variety of ways. I don't know much about graphic design, so here's where I stop pretending ;) The cover for GATU is art-based (Illustrated? Someone correct me if I'm using terminology wrong), which means there are no photo shoot stills to share this time. But here's the pretty, pretty cover in jumbo size :D 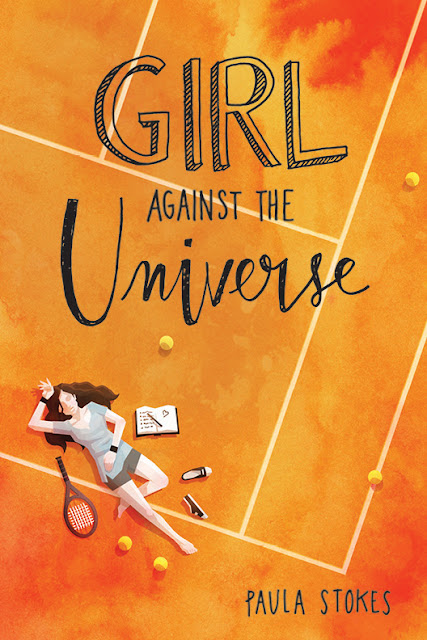 I did get a couple of cover composition drafts before this, but I didn't ask for permission to share those because they were basically just looser sketches of the final product and that would be like asking to post someone's rough draft. Instead I'm going to show my love for this GATU cover with a Top Ten List:


#10: The title. I was sort of whiny sad when my editor emailed to say that she and her boss thought the original title, Bad Luck Charm, was skewing a little too middle-grade and did I have some alternate suggestions. I had anchored that title into the first chapter and the last chapter. I had been working with it for about a year. I was kind of attached to it, even though I agreed it was a bit fluffy for the book. It just seemed so much catchier than anything else I could think of!

Eventually I sent my editor a whole slew of potential titles and everyone on the team liked Girl Against the Universe. Some of the rejected suggestions include: The Curse Effect, They Call Me Miss Fortune, Semi-charmed Life, and The Day I Tried to Live. (Sorry, Third Eye Blind. Sorry Soundgarden. Maybe next time ;D) It's funny, though. We officially changed the title in early April and since then I've grown really attached to it.

#9: The tennis court. I'm a big believer in covers as contracts between authors and readers. When a cover is all dark and scary and screaming MURDER DEATH KILL (points if you know the movie reference) and the book turns out to be a foofy love story, that makes me reader-me kind of cranky. Authors don't have ultimate control over their book covers, but I would never want to directly mislead readers. So yeah, there is a LOT of tennis in this story. This book might even improve your serve ;)

#8: The color. At first I was like "Orange? But will people think it's a clay court?" (I can be kind of "inside the box" sometimes, like so far inside I'm trapped and I can't get out.)

But then I realized tennis courts can be any color, and that orange is waaaay more eye-catching than the blue or green courts I played on in high school. Fun fact: I wrote an orange tennis court into the book after I saw this awesome cover :)

#7: The background effect. I don't know what this is called, but I love that it isn't just a flat even orange color, like paint. The different shades of orange and swirls of light and dark really make this pop. It's one of those things that makes me go "How did someone even think to do that??"

#6: The tiny but meaningful details. The shoes. The sweatbands. The perfect scattering of tennis balls. Nothing on this cover is trivial. It all adds up to perfect.

#5: The little heart that Maguire has drawn in her luck notebook. She might think she is all business, recording the bad things that happen and doing her five-second checks to make sure danger isn't lurking nearby, but she's not immune to being distracted.

#4: The dreamy and pensive overall feel of this image. Orange could be a really in-your-face color, but it's not overpowering here. The fact that this cover has a lot of open space and that the figure of Maguire is sort of undefined I think helps too. Again, the summation of a lot of separate smaller things add up to magic!

#3: The stylized artwork. I like that you only get a vague idea of what Maguire looks like. It's all exactly how I imagined her, from the hair to the skin tone to the body shape, but she's drawn in a way that still lets the reader fill in her details.

#2: Her realistic figure. We all know there's a tendency to idealize cover images, whether it's Photoshopping an already stunning supermodel or drawing a storybook princess with proportions incompatible with life. I love that Maguire has hips and boobs and thighs. I remember one of my first thoughts when I saw this was: Her leg is quite a bit bigger at the top than the bottom, just like mine. I'm so grateful for this realistic rendering of my protagonist.

#1: The title font. I've been looking at this cover for almost six months and I still can't decide if I like the "Girl" or "Universe" better. And the combination of the two is another one of those "How do people know how to do that??" moments. For realz. My inside-the-box brain would have used one or the other, but the mix n' match here really makes this cover something special.

So those are a few of my favorite things. Thanks so much to the cover designer Aurora Parlagreco and artist Amir Belhoula for coming up with a cover that matches both the tone and storyline of Girl Against the Universe so perfectly! Designers and artists work hard to create covers that readers love. What do you like best about this cover?

You can enter the Rafflecopter giveaway and meet four of the main characters on blogs run by some of my early readers :)

Meet main character Maguire over at Forever 17 Books. (Watch out for the tiger!)

If you're into supportive besties, you'll definitely want to meet Jade on In Love With Handmade.

Meet Maguire's therapist, Dr. Leed, (or Dr. Hottie as Stacee calls him) over at Adventures of a Book Junkie.

For a second chance to win a signed ARC (INT), join my mailing list before November 9th and I'll send you details on how to enter in my next Stokes About Books newsletter. For those of you who use Edelweiss, the GATU e-arc should be available soon, but I don't have an exact date. Someone let me know when it pops up, okay?